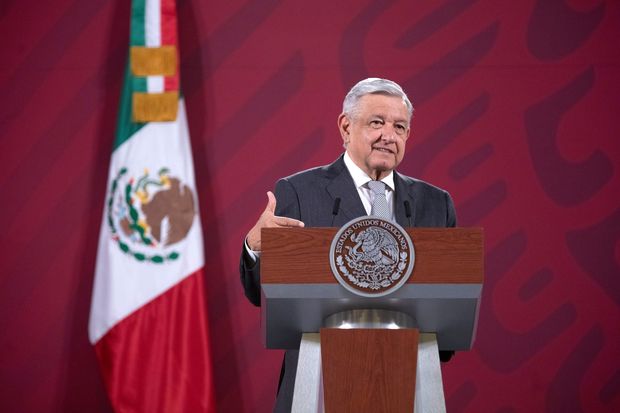 López Obrador, on his first official international trip in 19 months, hailed the Trump administration’s relationship with his country, just four months before the U.S. presidential election is set to take place.

“President Trump, like in the best times of our political relations, we have received from you during my tenure as president understanding and respect, instead of insults toward my person — and more importantly, toward my country,” the Mexican leader said at a Rose Garden ceremony.

López Obrador stuck to a historical theme for his Washington visit, comparing himself to 19th century Mexican President Benito Juárez, and Trump to Abraham Lincoln.

He discussed the often-mythologized relationship between the two historical presidents, emphasizing Lincoln’s allegiance to the Republican Party.

“That is why I’m here, to express to the people of the United States that your president has behaved toward us with gentleness and respect,” said López Obrador.

The leader’s comments were striking given Trump’s rhetoric about Mexico and immigrants from the country, as well as the Trump administration’s policies on immigration and border management.

The open praise came as Trump reportedly prepares to issue a new order terminating the Deferred Action for Childhood Arrivals (DACA) program, which grants more than half a million Mexican citizens the right to live and work in the United States.

Both governments had forewarned the visit would deal only with economic issues related to the trade agreement, a priority amid the coronavirus pandemic that has collectively killed more than 160,000 people between the two countries.

“This visit has been described in extremes, as a historic mistake on the part of President López Obrador and the Mexican government and as [equivalent to] the Nixon visit to China,” said Gerónimo Gutiérrez, the former Mexican ambassador to the United States who oversaw the early stages of USMCA negotiations.

“I tend to be a little less bombastic. Visits are always important, they can be useful in moving things forward,” Gutiérrez added.

The former ambassador said the importance of the economic relationship between the two countries could not be overstated, but he warned that the USMCA would not by itself resolve the economic crisis, particularly the one facing Mexico.

“If there is not a better climate [in Mexico] for both foreign and domestic investment, it will be very difficult to use both USMCA and the drift between the U.S. and China to our advantage,” he said.

López Obrador’s visit seemed designed to quell worries that his administration is hostile to private investment — he has personally pulled the rug out from under several billion-dollar investments.

Both presidents are scheduled to attend a White House dinner with CEOs from both countries, including Apple’s Tim Cook and Mexican magnate Carlos Slim, ranked as the world’s fifth richest man by Forbes.

While the economic message of the visit was regarded as positive, some observers said the risk amid a pandemic was difficult to justify.

“Presidents travelling during a pandemic — while I’m not thrilled with the idea, people travel during crises. The question is for what? There is no reason not to travel if the reason is so overwhelming,” said Roberta Jacobson, a former U.S. ambassador to Mexico.

“That’s not what I see here,” added Jacobson.

And the visit’s political repercussions could be lasting, particularly if former Vice President Joe Biden holds up in the polls against Trump.

“It’s important to remember that the USMCA could not have passed in the United States without Democratic support,” said Jacobson.

“The Democrats were not invited to the White House when USMCA was passed, and I don’t think it’s an accident that this visit was planned while Congress was in recess,” she added.

Jacobson suggested López Obrador could have reached out to House Majority Leader Steny Hoyer (D-Md.), who lives within driving distance of the capital.

But López Obrador made the trip about Trump and the business community, eschewing contact with Democrats, Mexican Americans and other groups who are connected to Mexico.

López Obrador, who campaigned as a leftist man of the people, rankled some in the Mexican American community, particularly as Mexican immigrants in the United States provide one of the biggest sources of cash to the Mexican economy in the form of monthly remittances.

“The Mexican elite is represented there. Obviously, [López Obrador] thought that having them there provides a level of reassurance for him, maybe that pleases Trump or some of the other administration officials,” said Rep. Jesús García (D-Ill.), who migrated from Mexico to the United States as a child.
“But what about the people that are sending $100 every month to their village, to their family, that helps keep the Mexican economy afloat, where is their table?” said García.

Rep. Raúl Grijalva (D-Ariz.) also criticized López Obrador, often referred to as AMLO, calling the White House visit a “photo op” that was “a slap in the face” to Mexicans, Mexican Americans and those across the border seeking asylum in the U.S.

“I had high hopes for Mexico’s future when López Obrador won the Mexican Presidency on a progressive platform that sought to tackle corruption, inequality, and push back on President Trump’s anti-Mexican and anti-immigrant agenda,” Grijalva said in a statement. “Instead, AMLO has become nothing more than Trump’s collaborator and has willingly executed Trump’s agenda on the other side of the border.”