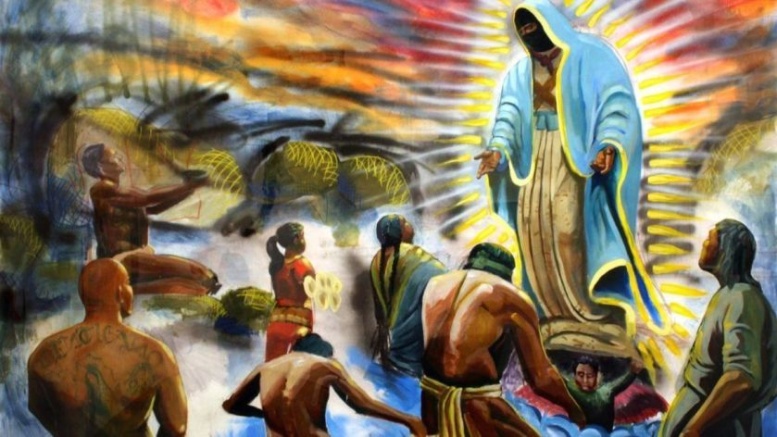 “If La Virgen Returned,” a 2009 spray paint and acrylic on paper by Pablo Andrés Cristi. On view at Muzeo through July 14 as a part of “Papel Chicano Dos,” a exhibition of Cheech Marin’s art collection.(Image courtesy of Muzeo)

“The questions of ‘What is Chicano art?’ and ‘Who is Chicano?’ have been circling for a few decades; Cheech Marin’s comprehensive collection gives us the opportunity to experience such variety that we begin to understand the complexity of this shared identity,” said Polly Nordstrand, Curator of Southwest Art. “Vibrant and imaginative images of Los Angeles are seen alongside reimagined oral histories and riffs on masterpieces of world art, illustrating the deep and wide influences in the artworks.

”Marin, an American stand-up comedian, actor, activist, and art collector who gained recognition as part of the comedy act Cheech & Chong during the 1970s and early 1980s, has developed one of the finest private collections of Chicano art in the United States and is passionate about sharing it. He questioned, “Why am I collecting all this art? I have enough art” and through the process of showing the art he realized “I am collecting this art to share it with the people.” 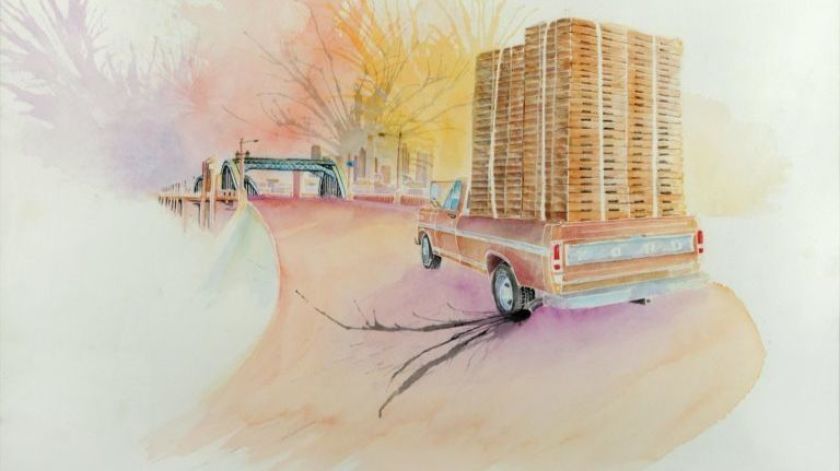 “Pallet Pickup on 6th Street Bridge,” a 2013 watercolor and ink on paper by Wenceslao Quiroz. On view at Muzeo through July 14 as a part of “Papel Chicano Dos,” a exhibition of Cheech Marin’s art collection.(Image courtesy of Muzeo)

The exhibition has traveled widely. After showing at the FAC, many of the works will find their final home at The Cheech Marin Center for Chicano Art and Culture, a new institution in Riverside, California scheduled to open in 2021.

The Colorado Springs Fine Arts Center at Colorado College (FAC) presents “Papel Chicano Dos,” an exhibition of works on paper from the collection of Cheech Marin. On view Dec. 4, 2020–June 26, 2021, the traveling exhibition features artworks by established and emerging Chicana and Chicano artists.

“Papel Chicano Dos” presents 65 artworks by 25 artists and demonstrates the wide diversity of imagery, content, and techniques used by Chicana and Chicano artists for more than 30 years. The earlier works from the 1980s and 90s include drawings and prints by celebrated artists such as Carlos Almaraz, Gronk, and Chaz Bojórquez. The popular tradition of mural works is evident in the large-scale works of Frank Romero, CiCi Segura González, and Pablo Andrés Cristi. Art works from the last ten years include stunning portraits by artists Sonia Romero, John Valadez, and Carlos Donjuán. 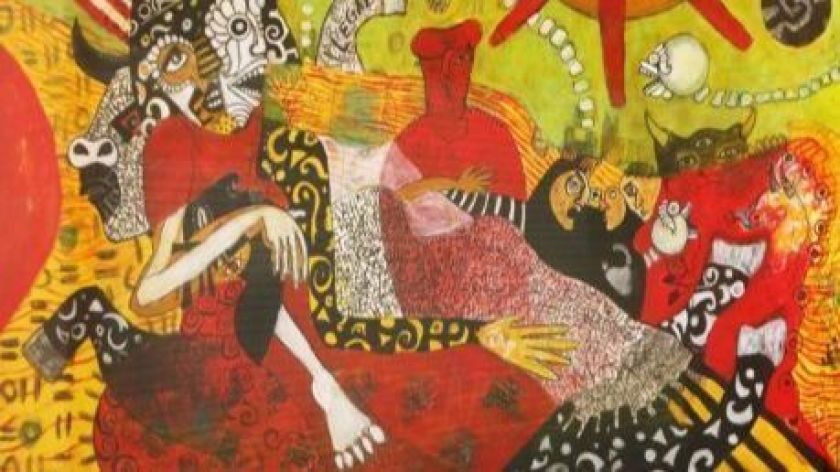 “Soy Chicana,” a 2013 mixed media on gessoed paper by CiCi Segura González. On view at Muzeo through July 14 as a part of “Papel Chicano Dos,” a exhibition of Cheech Marin’s art collection.(Image courtesy of Muzeo)

On view previously at eight other museums nationwide, the FAC will be the exhibition’s ninth and final venue before the works return to their new home at The Cheech. The exhibition and its national tour are organized and managed by Melissa Richardson Banks of CauseConnect.

Reservations to visit the galleries are required at this time. The FAC Museum is currently open in a limited capacity, operating in accordance with guidelines established by the Colorado Department of Public Health and the Environment (CDPHE), the City of Colorado Springs, El Paso County Health Department and Colorado College.

Museum free days are offered the second Saturday and third Friday of each month.

The following safety protocols are in place:

PLEASE NOTE: Exposure to COVID-19 is possible in public places. The FAC and Colorado College continue to closely monitor developments in the outbreak of respiratory illness caused by the novel Coronavirus (COVID-19) and plan for impacts that may affect FAC and campus operations. More information available on the Colorado College website. 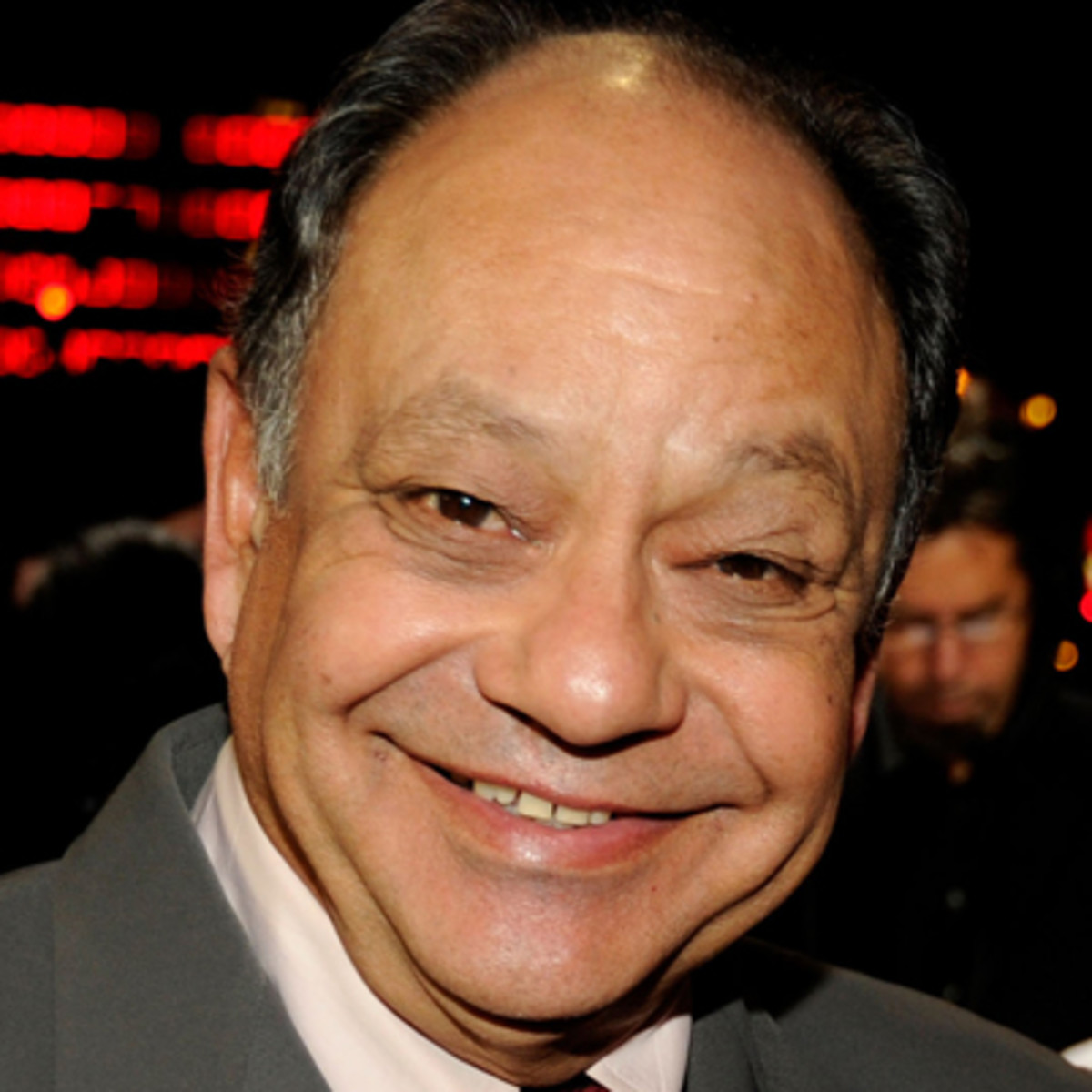 Primarily known as an actor, director, and performer, Cheech Marin has developed the finest private collection of Chicano art in the United States. He states, “Chicano art is American art. My goal is to bring the term ‘Chicano’ to the forefront of the art world.” A third‐generation Mexican American, Cheech has received numerous awards for his work on behalf of Latinos, including the 2000 Creative Achievement Award from the Imagen Foundation and the 1999 ALMA Community Service Award from the National Council of La Raza and Kraft Foods. In 2007, he received an honorary Doctorate of Fine Arts for his contributions to the creative arts from Otis College of Art & Design in Los Angeles, and received the inaugural Legacy Award for Arts Advocacy from the Smithsonian Latino Center.

ABOUT THE FAC MUSEUM

The FAC Museum’s permanent collection of over 15,000 objects showcases the rich history and vibrant contemporary cultures of the Southwest and the Americas, containing works of art from Native America, Hispanic and Spanish Colonial New Mexico, and 20th-Century America.

Colorado Springs Fine Arts Center at Colorado College
The FAC and Colorado College recognize and honor the original inhabitants of the land on which it resides. The story of the Colorado Springs Fine Arts Center at Colorado College (FAC) begins with the founding of the Broadmoor Art Academy 1919. A museum, performing arts theatre, and community art school, the FAC is a pillar in the cultural community of the Rocky Mountain West providing innovative, educational, and multi-disciplinary arts experiences designed to elevate the individual spirit and inspire community vitality. For more information about the FAC, visit fac.coloradocollege.edu or follow on Facebook @CSFineArtsCenter.

Gaspar Enríquez, Tirando Rollo (I Love You), 1999, Acrylic on paper, Courtesy of the artist.