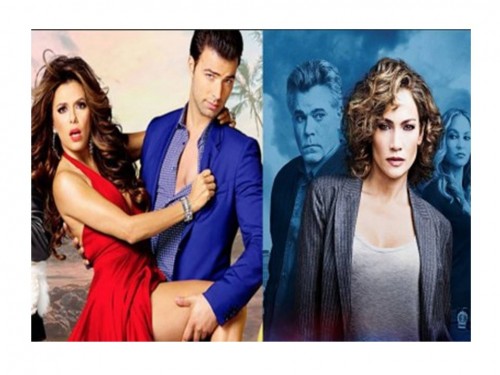 This year there will be not one, not two, but three shows on NBC starring Latinas. Two of the shows, Superstore and Telenovela, had previewed three episodes last fall (which is online) and will be airing new episodes.

Superstore stars the much-coveted America Ferrera, of Ugly Betty fame, as the buy-the-books floor supervisor, Amy, at the fictional Cloud 9 big box store. Ferrera is also a co-producer on the show.

I am a producer on Superstore, and that was really important to me. I’ve been just an actor on television and have really wanted to be a part of the conversations that shape the show and define where the show is going overall…”

One aspect of the show that Ferrera and the showrunners are excited to explore are the politics of running a megastore, which somewhat resembles chain retailer Walmart, which has workers that need public assistance. According to a report by the U.S. Committee on Education and the Workforce, the low-wage earning Walmart employees cost the American public $6.2 billion in welfare programs.

The show that follows Superstore tonight is Telenovela. It stars Eva Longoria, the Desperate Housewife alum, as she stars in…you guessed it, a telenovela called Las Leyes de Pasión.

There’s one thing, though, her character Ana Sofia Calderon doesn’t know Spanish and has to deal with the hijinks that come with being on a soap opera. Similar to Ferrera, Longoria will be executive producing Telenovela.

The other thing is, I knew if I was going back to comedy, I wanted to move the ball forward. You know, cable has really put pressure on dramas, but that pressure doesn’t translate to comedies,“

Telenovela will also include Jencarlos Canela as her ex-husband and love interest on Pasión. Diana-Maria Riva will play the show’s clothing designer and Calderon’s BFF. Amaury Nolasco of Prison Break will play the telenovela’s villain.

Like Longoria, Jennifer Lopez will be executive producing her new show, Shades of Blue. The drama will have Lopez playing a crooked cop and single mother, Harlee Santos, who becomes an FBI informant.

Shades will depict her struggle for the family she has with her daughter and the reputation she built with her crew in her police family with whom she takes shortcuts to get the job done while making some dirty money on the side.

Will she betray her comrades to the FBI, or become a triple agent and try to warn her boys in blue? Your just going to have to tune in and see.