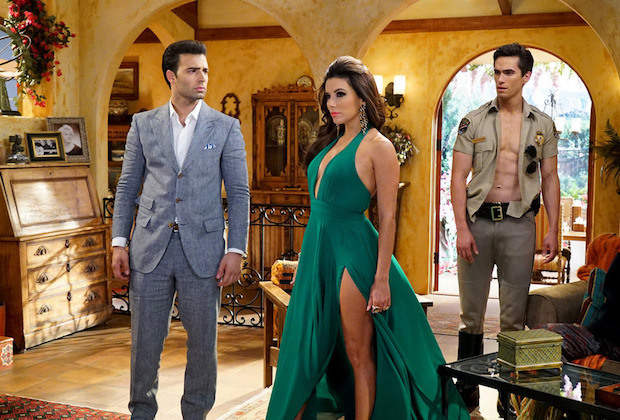 I laughed along with over 350 lucky persons to have been invited to a pre-screening of Eva Longoria’s return to television with NBC’s Telenovela.  Presented by MALDEF, the leading civil rights organization working for the benefit of Latinos, and as its president Thomas Saenz said in his welcome address, the evening was about marrying civil rights with the world of image makers in Hollywood for the benefit of Latinos worldwide.

Among the audience members were union leader Dolores Huerta, members from the world of academia including actress/professor Alma Martinez, PhD., and Denise Gutierrez, Director of Development at Cal State L.A.  Also newly elected El Monte City Councilman Jerry Velasco  (and former President of Nosotros), as well as teachers, studio execs, corporate and community leaders like John Echeveste CEO of Plaza Mi Cultura in downtown L.A and Gabriela Zabalua, Vice President, Multicultural Marketing for Frontier Communications and the sponsor for the evening.  Bringing this eclectic and influential group together for a special pre-screening of Telenovela for his dear friend Eva Longoria, was David Damien Figueroa.  The panel discussion with the cast after the screening was moderated by journalist and radio talk (KFI) and PBS host Elizabeth Espinoza .

After watching two episodes of the highly anticipated TV series, the audience’s boisterous applause was proof that Longoria was back with a show that has the potential of putting her in the ranks of the most successful TV producers in the U.S. Longoria already has one hit show, Lifetime’s Devious Maids which is in its 4th season.

Telenovela is a heightened, over the top (way over) drama that lives behind the scenes of the telenovela Leyes de Passion.  Its star, Ana Sofia Calderon (Eva Longoria) is beautiful, self-centered and a non-Spanish speaking star of a Spanish telenovela, who in spite of all this does not take herself too seriously.  She is however at the center of attention and in control, and that is just how she likes it.  Mimi (Diana Maria Riva) who is not only her wardrobe mistress, but her best friend and confidante, tells her how wonderful she is anytime she needs to hear it, as do the rest of the cast with the exception of her nemesis, Isabela Santamaria (Alex Meneses).  Santamaria is the former telenovela star who hates Ana Sofia for having replaced her.  Amaury Nolasco is the villainous and sexy Rodrigo Suarez, while Gael Garnica (Jose Moreno Brooks) plays Ana Sofia’s gay co-star with the washboard abs.

But things sour in Telenovela land when Ana Sofia’s ex and cheating husband, famous telenovela actor and singer Xavier Castillo (Jencarlos Canela) is cast as her leading man.  She tries to make the best of it until she storms off the set and into the street and has the “telenovela star meltdown”, that’s caught on camera by her adoring fans.  When this causes her to be demoted to the “mother role” of the next starlet Roxie Rios (Jadyn Douglas), who will now play opposite her delighted ex-husband, Ana Sofia takes action.  Enlisting Mimi to help her get back at her ex-husband, Ana Sofia hatches a plan straight out of the I Love Lucy playbook with Mimi playing Ethel to her Lucy.  The results are just as hilarious.

Longoria’s comedic timing is a perfect mix of Lucille Ball and Gabrielle Solis of Desperate Housewives.  Longoria proves herself a seasoned buster without betraying her character’s endearing qualities and we like Ana Sofia, we really do.

It’s been three years since we said good-bye to Gabrielle Solis of Desperate Housewives, but those have not been idle years for Longoria.  She has produced a few TV shows, some flopped (Ready for Love) and some have become major successes in spite of controversy (Lifetime’s Devious Maids).  She went back to college to learn more about her culture, receiving her masters in Chicano studies and Political Science.  She stumped for Obama at the Presidential Democratic convention. Additionally, her friendship with the great Dolores Huerta prompted her to shed light on the life of farmworkers by producing  two documentaries Harvest and Food Chains.

In answer to a question posed by Elizabeth Espinoza, on the importance of a show like Telenovela, Longoria quickly replied, “We  have a responsibility as content creators, as producers and writers and directors to bring our stories to the forefront,” she told the crowd.  “Because in today’s political landscape all you see about Latinos is in the news and what people say we are.” Telenovela certainly has a chance to change the perception of who Latinos really are.

In 2014 her production company, UnbeliEVAble sold a record number of scripts to ABC and NBC,  Television being one, which got a 13-episode order from NBC with the caveat that Longoria commit to star.  Fast forward to the back-to-back sneak peek of two episodes of Telenovela at 10/9c on Monday, Dec. 7.

To see the Latino characters in Telenovela and three episodes HERE.