The 2016 class of inductees to the Chicano Music Hall of Fame included recording artist Daniel Valdez who has recorded with Linda Ronstadt, toured with Carlos Santana and acted with Richard Pryor, Michael Douglas, Jack Lemmon and Jane Fonda.  Also included are songstress and bandleader Maxine Medina Delgado, who for years was a pioneer bandleader with Maxine and Company. The remaining legacy inductees, whose work stretches back into the 1940s, includes veterans Phil Trujillo (Phil Trujillo y Los Matadors). Mitch Garcia (Mitch Garcia y los Unicos) and the Five Diamonds.

The Chicano Music Hall of Fame was created to recognize artists who have made significant contributions to the musical traditions of Colorado. The focus has been to recognize those that have helped to raise the consciousness toward the “music that was borne in Mexico but raised in the United States”.

The induction will take place in conjunction with the 20th Annual Chicano Music Festival and Auction on July 28th which will include a concert featuring performers who are previous inductees. In addition, there will be an exhibit featuring memorabilia and mementos from enshrined members of the Chicano Music Hall of Fame. The Chicano Music Festival and Auction will celebrate its 20th year, July 27th through July 31 2016. (For full schedule visit Su Teatro website www.suteatro.org). 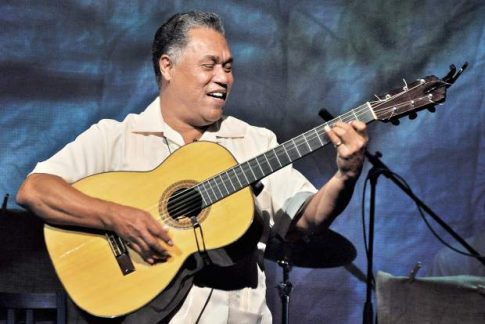 Daniel Valdez is a musician and composer who although he has performed nationally and toured internationally and is originally from California actually has called Colorado his second home for the last 16 years. His roots in Colorado go back to his participation in activities with the Crusade for Justice.  An early highlight was the live production of America de los Indios performed by Daniel Valdez and Menyah recorded in November of 1975 at the old KRMA studio on 14th and Glenarm. Daniel continued his relationship with Colorado where he chose to put its history to music composing The Westside Oratorio with Su Teatro in 2006 and the So

ng of Pueblo with History Colorado at the Sangre de Cristo Arts Center. (The production still continues to tour.) He has also been a teacher at the Escuela Tlatelolco and guest lecturer at Regis University.

Maxine Medina Delgado was the lead singer for her band Maxine and Company that, throughout the 1990s and 2000s, was the dominant female led, Latino band during that time period. Maxine’s versatility allowed her to switch genres from R & B and Soul to rancheras and cumbias effortlessly. She innovatively updated many of the traditional Mexican dance music to include more jazz instrumentations.

Mitch Garcia has been playing Spanish music, Chicano style, his entire career.  Mitch’s performance venues include such legendary entities as the GAO ballroom where he appeared; and the former the KFSC radio shows for the late Paco Sanchez as well as his local television broadcasts. He formed and led Los Unicos, a powerhouse group that included CMHOF inductees the late trumpeter Tony Falcon, and the versatile John Segura,

at was once part of Mexico.  But Colorado also carries traditions that reach beyond that time into the period of Spanish Colonialism and further back into native and pre-European traditions as well.  All of which is evident in the music of the Chicano community throughout the state. If the mainstream music of Colorado is eclectic, the bilingual-bicultural experience is even more so.

HOUSTON, TX – APRIL 8, 2021 – (LATINX NEWSWIRE) - Dr. Michael Bardwil, MD, FACS, is a highly respected member of the healthcare community as well as the owner and founder of Texas Vein & Cosmetic Specialists, with clinics in both Houston and Katy. He is a board-certified specialist in vascular surgery and general surgery …
View More

See What's Coming Up At Museo