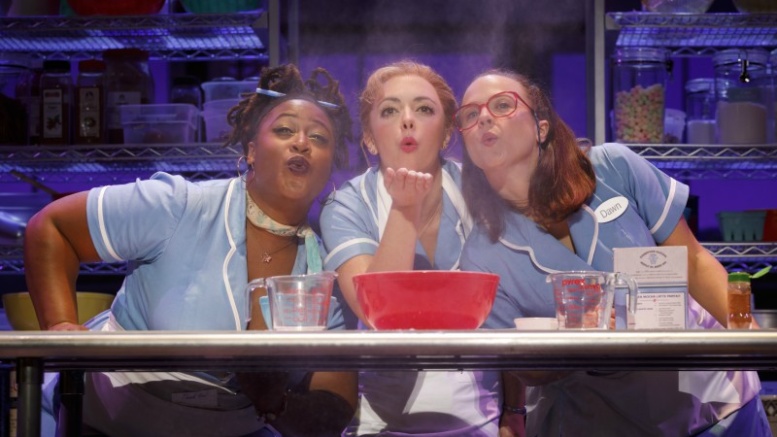 “The play Waitress, was hysterical. Loved how it included multiple serious women issues, but turned it into a musical comedy. It was a very entertaining play”. That’s the way Melinda DiMarco  described this Broadway touring production currently playing the Buell Theater at the Denver Center for the Performing Arts through December 31st.  Jessie Olgas, an accomplished theater actor in his own right said the play was “entertaining with great music and a cast of solid actors”.

This play is much more than just a slice of American pie with music and humor for the toppings. It is a look at the challenges people face in looking for love and often in all the wrong places. “We call Jenna ‘The Queen of Kindness and Goodness,’ ” said Jessie Nelson, the plays writer. “She knows how to take care of everybody but herself. She presents this sunny exterior, and she bakes these extraordinary pies, and she’s the only one who can handle the curmudgeonly customers. But she’s also living this very dark secret — this relationship she’s in that is really destroying her self-esteem, her hopes and her dreams.” 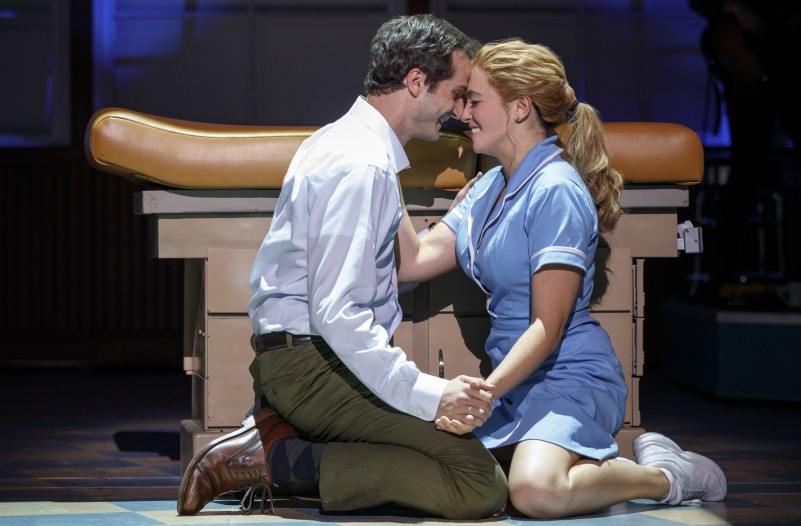 Bryan Fenkart and Desi Oakley in the national touring production of the hit Broadway musical ‘Waitress,’ playing at The Buell Theatre in Denver from Dec. 19-31. Photo by Joan Marcus.

The promotional blurb describes Waitress as, “It’s an empowering musical of the highest order!” raves the Chicago Tribune. Inspired by Adrienne Shelly’s beloved film, Waitress tells the story of Jenna — a waitress and expert pie maker, who dreams of a way out of her small town and loveless marriage. A baking contest in a nearby county and the town’s new doctor may offer her a chance at a fresh start, while her fellow waitresses offer their own recipes for happiness. But Jenna must summon the strength and courage to rebuild her own life. “Waitress is a little slice of heaven!” says Entertainment Weekly and “a monumental contribution to Broadway!” according to Marie Claire. Don’t miss this uplifting musical celebrating friendship, motherhood, and the magic of a well-made pie.

Waitress made history in 2015 as the first-ever Broadway musical with a female director (Diane Paulus), writer (Jessie Nelson), composer (pop star Sara Bareilles), choreographer (Lorin Latarro) and orchestrator (Nadia DiGiallonardo). Nelson considers collaborating with Bareilles, a six-time Grammy nominee, to be “the greatest gift of this experience” — especially given this was the first piece either of them had ever written for the theatre.

If all the buzz by the theater goers leaving the opening night production is any indication Waitress is sure to energize, inspire and challenge your views of love and happiness and what lengths people will go to to find it.

· Run Time: 2 hours and 30 minutes with one intermission

· Ticket Price: Starts at $25 at denvercenter.org
Please be advised that the Denver Center for the Performing Arts – denvercenter.org – is the ONLY authorized online ticket provider for this productions in Denver.

Race In Your Face, Detroit ’67, A Look Into Our Collective Soul Then & Now, LLD Theater Review…

“The River Bride” A Fish Out Of Water, LLD Theater Review