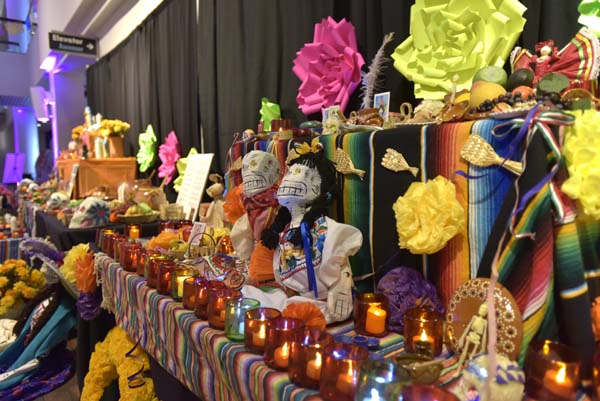 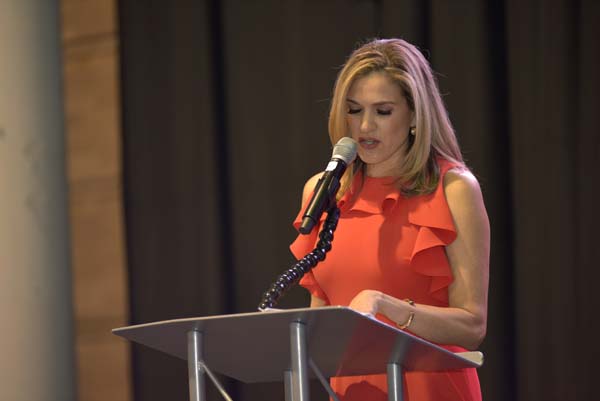 Mistress of Ceremonies Vanessa Bernal welcomed a sold out audience to the first ever Mexican Cultural Center Gala Fundraiser. Photo by Marco Briones

It was a delightful evening as generous portions of appetizers were served during the reception while attendees perused through the numerous display of Silent Auction items. The musical sounds of young artist, Lily Primus a 17-year old harpist from Denver  welcomed guests to this wondrous event. The reception areas were adorned with altars while guests convened and placed their bids. Among the smorgasbord of activities was a grand opportunity to network with others while immersing themselves in the cultural ambiance of this celebration. 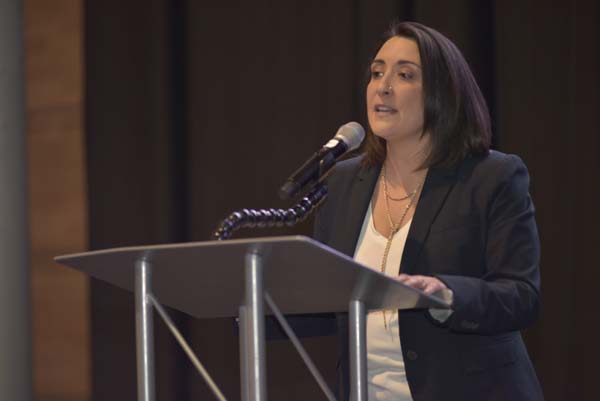 It was Mexican Cultural Center’s (MCC) first annual fundraiser honoring Dia de los Muertos held on Thursday, October 24, 2019. The event commemorates a traditional Mexican holiday celebrating the loss of loved ones. The museum was transformed into the center of Mexico’s cultural core of Dia de los Muertos. Attendees regaled with bright marigold decorations, with luminous altars displaying the symbols of respect and honor for those passed on.

Entertainment during the dinner hour was provided by Las Dahlias, an all-female classic Mexican mariachi music group. This talented group of women performed with such elegance and grace that added a wonderful experience while the perfectly prepared dinner was served. To top off the dinner was the traditional skulls display of cookies. 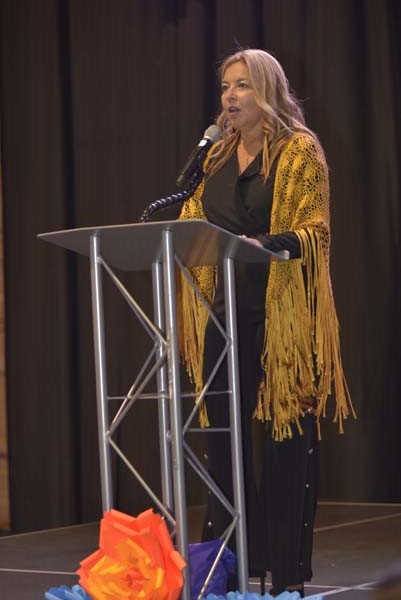 Among the evening’s highlights were videos of the historical meaning of Dia de losMuertos, narrated by Marcela de la Mar, Board Chair for the Mexican Cultural Center. Photo by Marco Briones 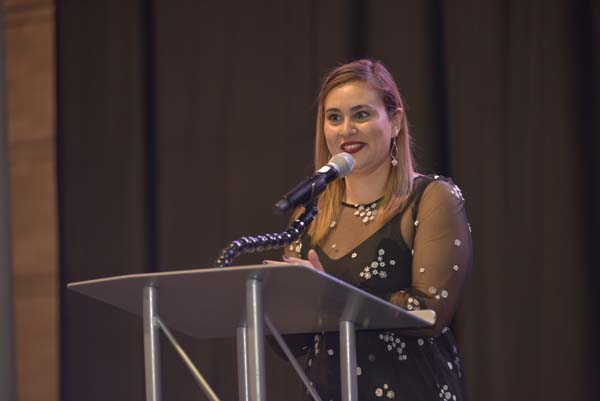 The evening also featured the video debut of the Mexican Cultural Center’s evolution over the years, it’s impact in community and the importance of cultural acceptance in the workplace. “Arts and Culture builds community” stated Ana Valles, MCC Executive Director; “we work as a team with other institutions.” This model is attributable to the longevity of the Mexican Cultural Center.” 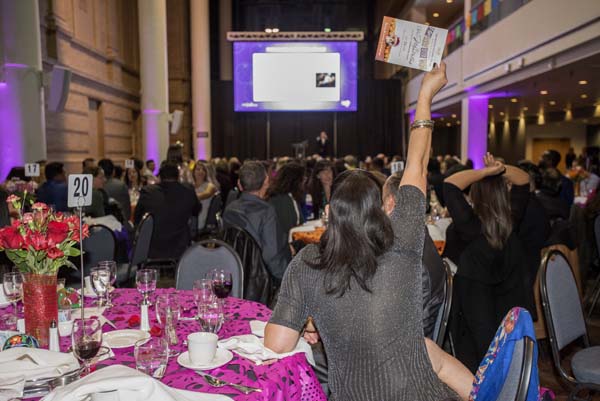 Auctioneer Jim Burz kept the fun and the money flowing raising thousands of dollars for the Mexican Cultural Center of Denver. Photo by Marco Briones

Of course the purpose of the event was to raise money. Auctioneer Jim Burz who regaled the evening with an upbeat and entertaining elegance that wowed the audience and kept the fun and the money flowing. All inclusive vacations to Mexico and Africa helped raised thousands of dollars. Latin Life Denver Media was the winner of one of the African safari vacations.  It was truly a night to remember.

“It is those stories, those family legends, those funny antidotes that are passed through the generations that really give us breath and make us alive honoring our loved ones and keeping them alive in spirit through us,” said Colorado Governor Jarid Polis at the opening of 1st Annual Fundraiser “Dia de los Muertos” to benefit Denver’s Mexican Cultural Center (MCC).

The Governor added, “Dia de los Muertos is a holiday that celebrates the joy we feel when we think about our loved ones, the one day when we get to celebrate our ancestors and visit with them. It shouldn’t be a day so much a process of mourning but rather celebrating that which is very much still alive that they have bequeathed us” he said. (see video above)

The Mexican Cultural Center has provided arts and cultural events and programs to Colorado for over 27 years. Their programs can be experienced year-round and are offered at no or low cost to the public. The range of cultural programming extend from the deepest cultural and historical regions of Mexico and welcomed to Colorado. 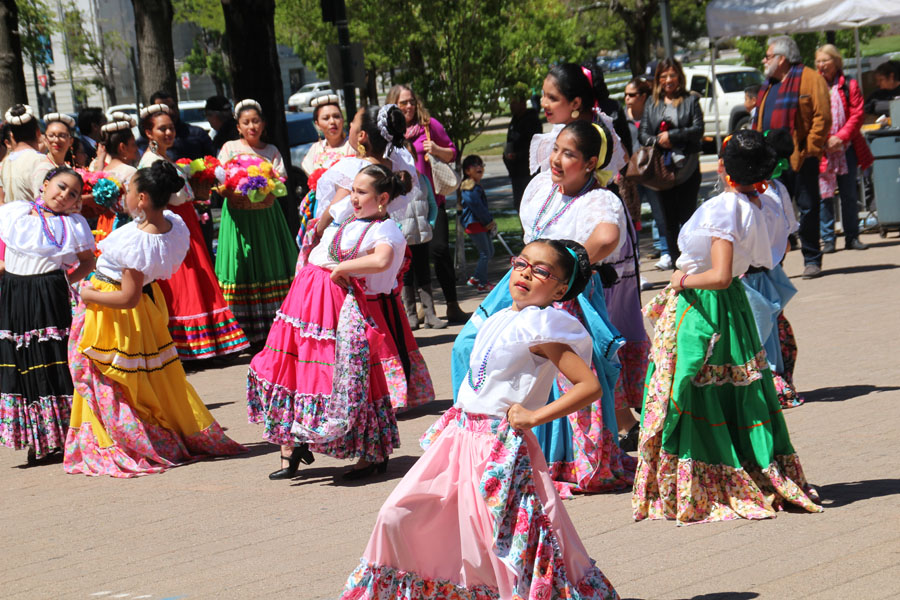 Last year they received over 30,000 attendees to their events. Dia de los Niños kicks off the season in April, hosted at various venues including the Denver Art Museum,  The Denver Museum of Nature & Science, History Colorado, Denver Public Library, Clyfford Still Museum, Byers Evans House Museum and the Boulder Museum of Contemporary Art”.  Thousands and children and their families enjoy a wide range of entertainment and workshops for all ages.

The Colorado Symphony in partnership with the Mexican Cultural center for over 10 years have invited the public to hear the blend of Mexican, Modern and Classical music free to the public at their Latin Beats Performance in September. Throughout the year there are numerous programs offered such as Mexican cuisine cooking classes, arts classes and tequila tasting with the most exquisite brands manufactured throughout the Mexico.

To see many more photos and get more information on how you can get involved with the Mexican Cultural Center, go to their website: www.mccdenver.org Photos will be published Monday November 28th.

Let me die like a Mexican, Thinking Through My Fingers

Tatanka: The Spirit of the Land, Art Exhbit March 8 -May 30th