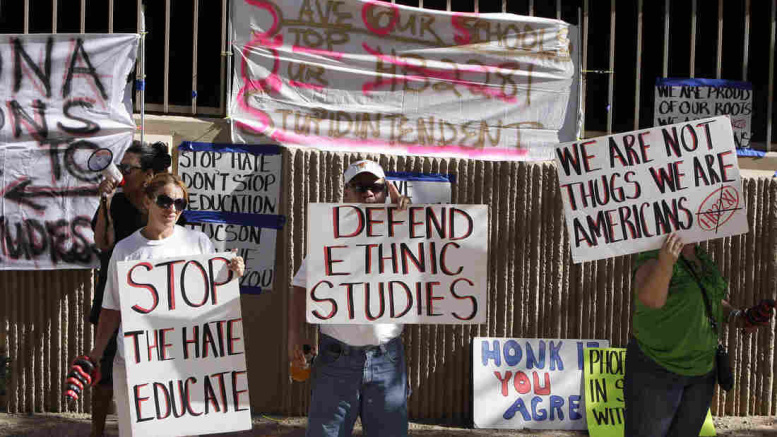 Larry – parent: This play was an exceptional truth that exists in our society. It makes you realize that the Chicano Movimiento is an everlasting conflict with our society. Adelante nuestros hermanos/hermanas!

Bonnie – parent: Growing up a rural area where family history seemed to be non existence and striving to find my roots, information such as this real life play helps with understanding the struggle people of culture deal with on a daily basis.  It is an opportunity to teach my children how important education is. This was a great play that everyone should attend and it was interesting that educators from all different cultures were there attending. It would be great if invitations were sent to all school districts and colleges. Such a great way to reteach/voice/remembrance of our Latino history!

Larysa – High School Student: I thought the play was very influential and educational for me. It helps me understand my culture even more and how much we had to fight for equal rights. It was a great play that I think would teach others to be more welcoming to other cultures because we are all people, we all have a heart and should treat each other with respect and not judge them based on who they are.

Logan – Elementary Student: Watching the show demonstrated how the lack of diversity was in earlier days. Becoming informed of how cultures are unknown in today’s society with no respect for the futures that are coming.

What if it was against the law to learn about your history, culture and ancestry in school? Especially if you are Mexican-American.  How would you react if your children or you as an ethnic studies student were thriving under the inspiration of Mexican-American studies, just to have it taken away calling the teaching of Chicano studies racism that victimizes white people and that it should be legally banned.

That is what happened in 2010, when growing fears around immigration, a recession, and a midterm election made Mexican American Studies a perfect wedge issue to feed the Arizona Republican base. The proposed legislation did not stand alone.  SB 1070 (legalizing racial profiling) and Prop 107 (banning affirmative action) were also introduced by Arizona Republicans during this election cycle. On May 11, 2010, Arizona governor Jan Brewer signed HB 2281 into law. 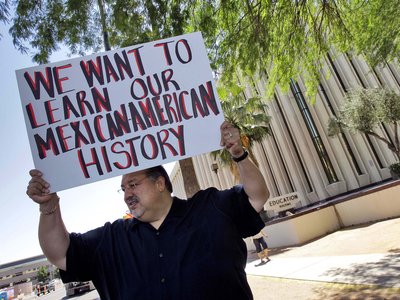 Could similar legislation be passed here in Colorado and around the country given today’s political climate?

The play directed by  Anthony Garcia, Su Teatro’s Executive Artistic Director and written by playwright Milta Ortiz uses the dialog from official transcripts of the people involved with the legislation and from the 2012 documentary “Precious Knowledge” 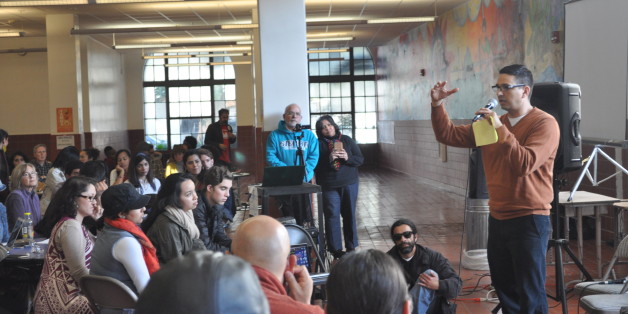 Teachers of a controversial Mexican-American studies program outlawed by the Arizona legislature are pressing to spread similar programs across the country.

The documentary showed that in the past, many of the state’s Chicano students were relegated to vocational classes and that as many as 50 percent dropped out before graduating from high school. But the Chicano consciousness-raising that began in the 1960s and ’70s eventually helped lead to the creation of a Mexican American/Raza Studies program in 1998. The result, according to the documentary, was encouraging: Those taking these classes, which were open to all students, showed significant improvement on standardized tests, and 93 percent of the participants graduated.

Watching this play at Denver’s Su Teatro Performance Center made me wonder where I and many other like me would be were it not for the Chicano Movement of the late sixties and seventies.

Chicano Studies programs and organizations like  UMAS (United Mexican American Students and Mecha (Movimiento Estudiantil Chicano de Aztlan (Chicano Student Movement of Aztlan) enabled so many Latinos, including myself, to become educated and pursue life long careers in politics, business, education, media, community advocacy and many other professions. The Chicano Education Project, spearheaded by Federico Pena before he became the first Hispanic Mayor of Denver and Rodolfo “Corky” Gonzales’ Crusade for Justice were organizations that further educated many of today’s leaders and have inspired the creation of several other organizations and programs that assist in Hispanic student development through leadership training and scholarships. 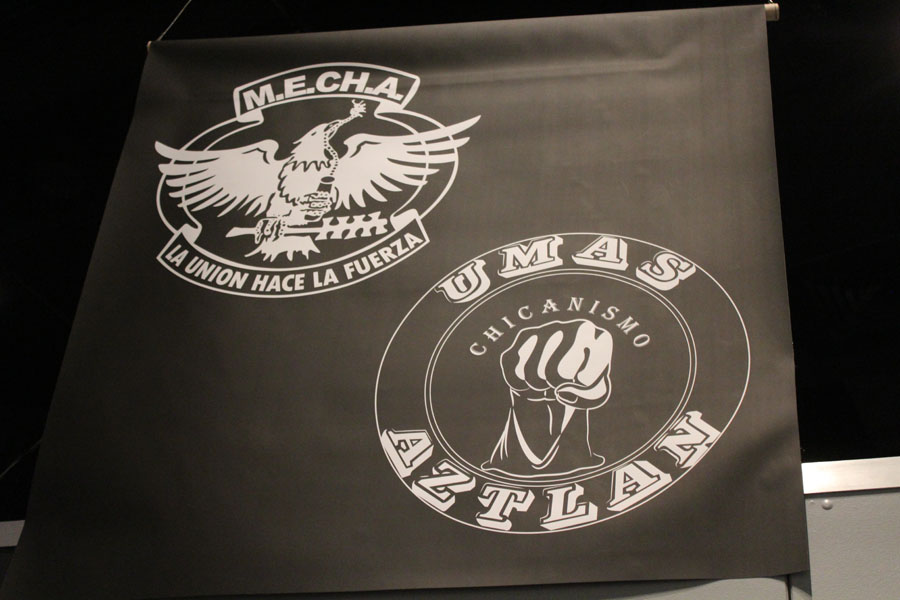 I shudder to think where we, where I, would be without the struggles and sacrifice all those predecessors went through so that Mexican-Americans could have the right to learn about their own self-identity and pursue higher education. It is unbelievable that fifty years later the struggle for equitable, relevant education through Mexican American Studies continues in this country.

The actors in MAS are convincing in each of their roles as students, teachers, administrators, politicians and community activists. The intimate setting of the Su Teatro theater makes you feel as if you are right there alongside them sharing their thoughts, ideas and experiences. Your feel like you are present at the school board meetings and protests. Several in the audience even joined in some of the protest chants of “Our education is under attack! What do we do? Fight back!” and “Education not incarceration!”. 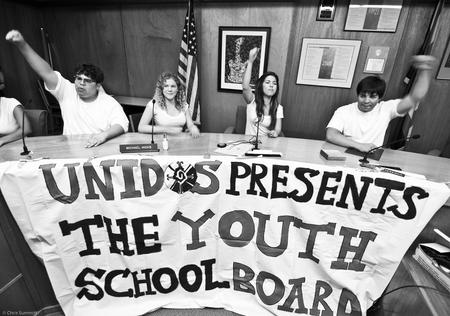 You can almost feel what it must have been like on May 3, 2010 when as Nacla.org reported. “It was a surreal day at the Tucson Unified School District (TUSD). That afternoon, the entire neighborhood surrounding the district’s headquarters was blocked off by Tucson police officers. K-9 units were on the prowl for bombs, snipers were stationed on the building’s roof, a bomb squad patrolled the front of the building, and a helicopter hovered above. Dozens of officers lined the streets, and there were police vehicles as far as the eye could see. Near the entrance stood a makeshift altar set up by local clergy. By 4:30 p.m., two hours before the start of the school board meeting, several hundred people gathered outside, in the 90-degree desert heat. The building was locked down. Why this high level of “security” usually associated with militarized societies?”

In 2013 a federal judge ordered the Tucson Unified School District to end segregation and implement culturally relevant courses such as the ones taught in the Mexican American Studies Program that were recently banned by an Arizona law. In his ruling Judge David C. Bury ordered that the cour 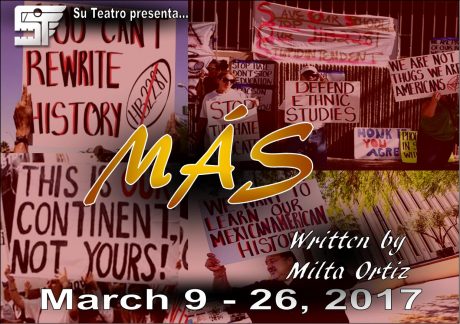 Nancy Ramirez, a lead attorney in the case, applauded Judge Bury’s order, saying culturally relevant courses have been proven to “engage students and helps them do better academically.” However the ban on Mexican American Studies in Tucson remains in effect to this day.