When Irene Martinez Jordan arrived in Miami, Florida on Tuesday with her husband, Dick Jordan,  she was not really sure what to expect. She knew she was there to receive national recognition and  accept a Positive Impact Award at the Hispanicize 2015 media conference but she told Latin Life Denver, who was also there to cover the conference and the awards gala, that she felt a bit overwhelmed by it all. “There are so many people that do so many great things that I am almost embaressed to be here for such an honor.”

On Wednesday after attending a “Latinovator” lunch gala with television superstar, DonFrancisco, of Univision’s “Sabado Gigante‘  she and her husband along with other attendees were treated to a “I’m Lovin it Voyage Yacht Party, sponsored by McDonald’s, that included a cruise around the Miami harbor complete with  food, drinks, dancing and spectacular views of the Miami skyline.

Thursday evening was Irene’s night, her turn to take the spot light, She walked the red carpet along with the other four winners pausing for interviews with local and national media reporters wanting to get her story. Then it was off to the elegant ballroom of Intercontinental Hotel in Downtown Miami for the Gala in her honor.

The after party featured performances  Latin Grammy winning Puerto Rican singer, composer and soap opera actor, Luis Fonsi and Grammy nominated Palo that included a surprise performance by Tito Puentes Jr. Wow, what a night! Asked at the end of the evening if she was glad it was all over, Irene told Latin Life Denver, “Oh my goodness, yes, I was so nervous being up there with all those people,  It is such a great honor” she said.

Irene Martinez Jordan was nominated for the award by Angela Cortez, AARP Colorado director of communications for her tireless work with the Denver Public School system and its students as well as for her advocacy of various issues affecting Latino senior citizens in Colorado.

“Irene is an outstanding leader and volunteer, she is so deserving of this award, and we at AARP are so very proud of her. Irene makes a difference every day.” said Cortez

“I am truly honored to have been nominated for the Louis Pagan Positive Impact Award,” said Martinez Jordan.

She was nominated for the award following a 2014 AARP online blog that highlighted her work with AARP Colorado’s advocacy team and El Comité, a Hispanic advisory group. After reviewing dozens of nominations from across the U.S & Puerto Rico, the organizers picked five people to attend the Positive Impact Award ceremony.

Martinez  Jordan is one of the first Latinas on the AARP Colorado advocacy team. She also is considered a powerhouse in education and a champion of Latino students within the Denver Public School system. She has been a teacher, counselor, principal and an area superintendent.

Martinez Jordan received the 2009 Women of Distinction Award from the Girl Scouts, and served as a mentor for the Latina Circle of Leadership and Adelante Mujer conferences, both programs that work to empower young women.

Martinez Jordan, originally from Pueblo, has an Ed.D. in curriculum and instruction, a master’s degree in guidance and counseling, and her undergraduate degree is in education and English literature.

With all the above to her credit, she says her greatest professional accomplishments include school reform – turning around failing schools and making them such attractive institutions that there are currently waiting lists of students wanting to attend

Irene Martinez Jordan is considered a powerhouse in education and a champion of Latino students within the Denver Public School system. While working for the Hispanic Education Advisory Council, she was a liaison between the Hispanic Community and DPS.

Her work resulted in stronger bilingual programs district wide, as well as renewed and greater emphasis placed on graduation rates. Currently she, along with the rest of the AARP Colorado volunteer advocacy team, is focused on expanding the availability of affordable housing, preventing untested drugs from entering the market, as well as advocating for additional funding for senior services in Colorado.

“The collaboration, sharing and dedication that is demonstrated by each of these individuals makes them a shining example of what it means to live life in service of others,” said Hispanicize Event founder and creative director Manny Ruiz. “The time and effort that many people dedicated to nominating these individuals is a testament to the amazing work that is being done in our communities across the nation.”

This is the second year in a row that a person from Denver was chosen for the honor. Jesus “Chuy” Medrano received the award last year for his work enriching the lives of Hispanic landscapers becoming the first president of the National Hispanic Landscape Alliance growing it to more than 500,000 members.

“Dr. King is unique because many school districts from around the State of Texas, the Nation, and now even Internationally are coming to PSJA to visit and draw ideas from “Best Practices” that our school district has implemented in the areas of Student Dropout Recovery, Early College High School Model/College for All, Parental Engagement, and also our Texas Education Agency is sending districts to observe our best practices with our Dual Language Program as well as our Early Childhood program.” (See complete nomination and accolades.) 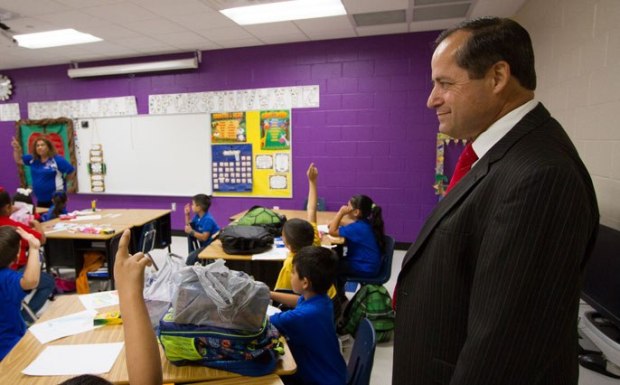 “As per the award description, the Positive Impact Awards were established to recognize outstanding Latino individuals who remarkably act for the goods of their communities and make positive impacts. My fellows and I at Florida International University (FIU) believe that our nominee, Ms. Karina Andrea Quintana, is indeed the epitome of an outstanding young individual who generously devotes her time and effort to the organizations she is involved in without expecting anything in return.” (See complete nomination and accolades.)

“As a counter to existing stereotypes in print, on TV, radio, film, video games –‐ essentially all media platforms, Laura and Alicia founded the only digital magazine (still!) of its kind (www.latinitasmagazine.org)–‐ made for and by young Latinas in 2002 in a class at UT Austin. But, they wanted content to be accurate and they also wanted to counter the lack of representation overall in the newsroom which was discouragingly low even in the most Latino cities in the U.S. and so they also developed innovative digital media, technology and cultural literacy education programming in the form of clubs, camps, workshops and conferences that have served tens of thousands since 2002.” (See complete nomination and accolades.)

“Nora Sandigo is a community “Mother Teresa” to hundreds of Latino children, who have been separated from their parents due to immigration and deportation laws. She is the legal guardian to hundreds of U.S. citizens born to illegal immigrants who are subject to deportation and through her non–‐profit organization, “American Fraternity” she serves these children and families with their needs ranging from food and shelter to legal advice in the courts.” (Seecomplete nomination and accolades.)

Named in honor of Latino social media pioneer Louis Pagan, the Positive Impact Awards recognizes 5 outstanding individuals who do remarkable deeds for the Latino community. The awards aim to distinguish individuals who have worked to improve their communities across all industries including health, education, social work, music, film, entertainment, legal, business, journalism, social media, mentorship, public service and military.“This year’s awardees are truly making a positive impact,” said Stephen Sanchez, global communications manager for 3M. “We hope their stories inspire others to follow in their footsteps.”