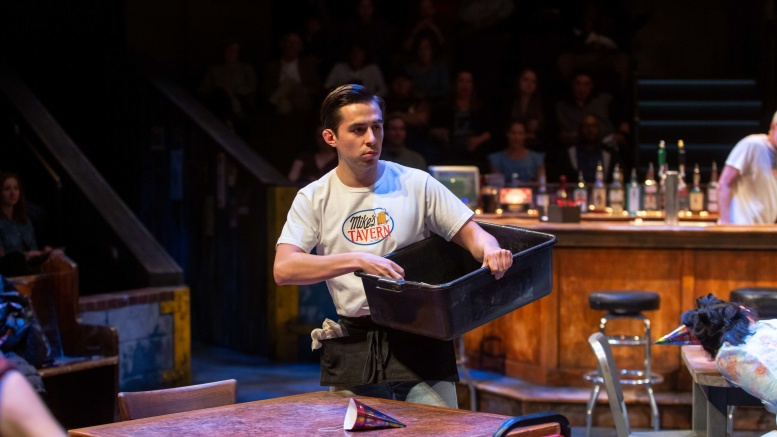 Oscar, played by Gustavo Marquez, is the bar bus boy at the local watering hole in Reading , Pennsylvania where steel mill workers come almost daily to moan and groan about work and gossip of what may or may not be going on at the plant. A type of ‘Cheers’ bar environment only there is not much to laugh about.  Oscar, the only Latino in the play,  while in almost every scene is seemingly invisible to the regulars who patronize the joint. They talk through him and around him never acknowledging his presence. He is part of the cast of Sweat, currently playing at the Denver Center for the Performing  Arts. (Read more of Marquez’ career from Denver janitor to theatrical star below) 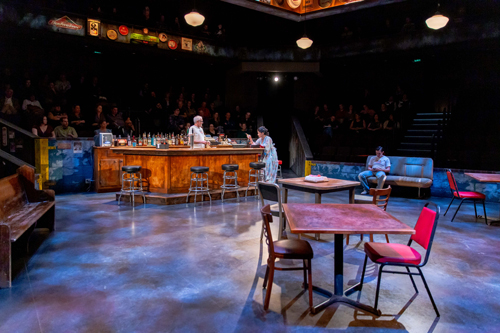 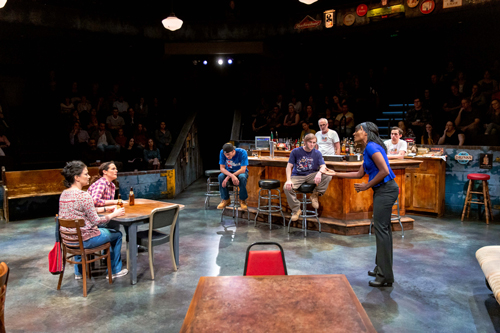 The Company of Sweat_Photo by Adams VisCom

Reading, Pennsylvania could easily have been Pueblo, Colorado where families had worked for decades forming unions and productive lives despite not having higher education.  It seemed at one time everyone in Colorado knew someone who worked at the CF&I Steel Mill.

But unlike Pueblo, where the workers were predominantly Hispanic the workers in Reading are Whites & Blacks who get along fairly well until things start to change. 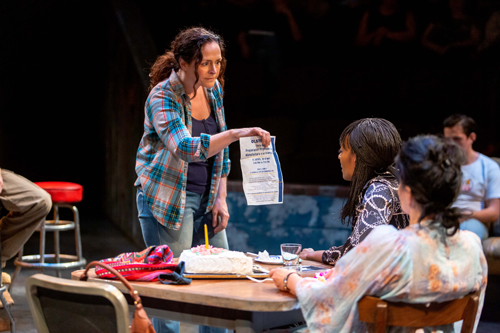 When Oscar decides to leave his job at the bar and cross the striker’s picket line for better pay all hell breaks loose. He now has their full attention for all the wrong reasons. The once invisible Oscar is now the target of the bar patrons frustration with the plant. They take out their anguish on him with hate calling him a spic and a scab. 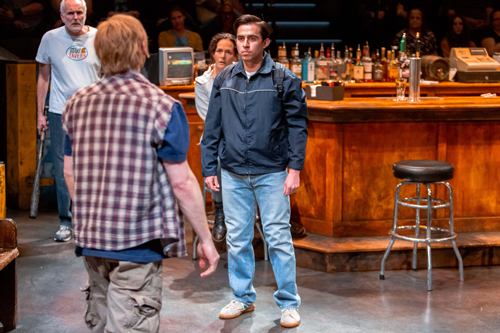 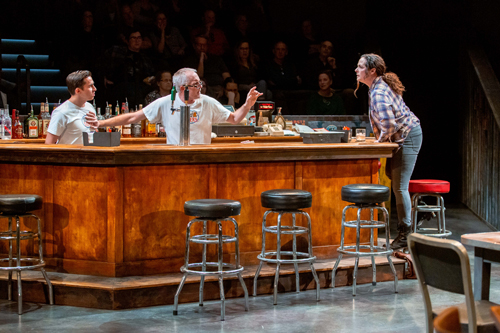 Sweat examines what happens to the people of a town when its major employer decides to move operations to Mexico leaving them to fend for themselves with limited resources and scarce financial support from the union they believed would fight for them. The collateral damage caused when an uncaring corporation pulls out of a town or city to secure its profits and future. The once vibrant town and its people succumb to poverty, drug and alcohol addiction with little hope of recovery.

For Pueblo, the Colorado Fuel and Iron Company (CF&I) was once the state’s largest employer, largest private landowner and ran the largest steel mill west of the Mississippi.

Up until the 1980’s a college education seemed unnecessary given the plentiful jobs provided by CF&I, the main steel mill. “For generations, families were able to make a good living with the CF&I,” said Sandy Gutierrez head of the Latino Chamber of Commerce in Pueblo to a Denver Post reporter “So the mentality was, ‘you know what? I’m going straight to the workforce and start earning a good paycheck and bypass college.’”

The economic crisis here started back in the 1980s when the steel industry collapsed and the city’s largest mill slashed its workforce. “The recession, I don’t think, ever was over in Pueblo. It hasn’t been over since 1980.”

“The lengthy nature of the downturn has been destructive for the community. I’ve talked to some leaders who talk about a permanent underclass here in Pueblo,” says Ann Stattelman, who runs Posada, a local charity that works with the homeless and poor families. “And I think unfortunately that’s what we have created with the subsistence on government aid.”

“The same thing happened to me at the steel plant just outside of Chicago” said Sal Gomez. “The steel plant closed in the 80’s and to this day that town has never recovered. I was one of the lucky ones. I was able to move to Denver and start a new life here.” he told Latin Life Denver Media

Sweat is intense but equally entertaining. The acting is superb and polished.  The Pulitzer Prize winning play was written by Lynn Nottage who is also known for her plays, Ruined, By The Way;Meet Vera Stark, Intimate Apparel  and others. 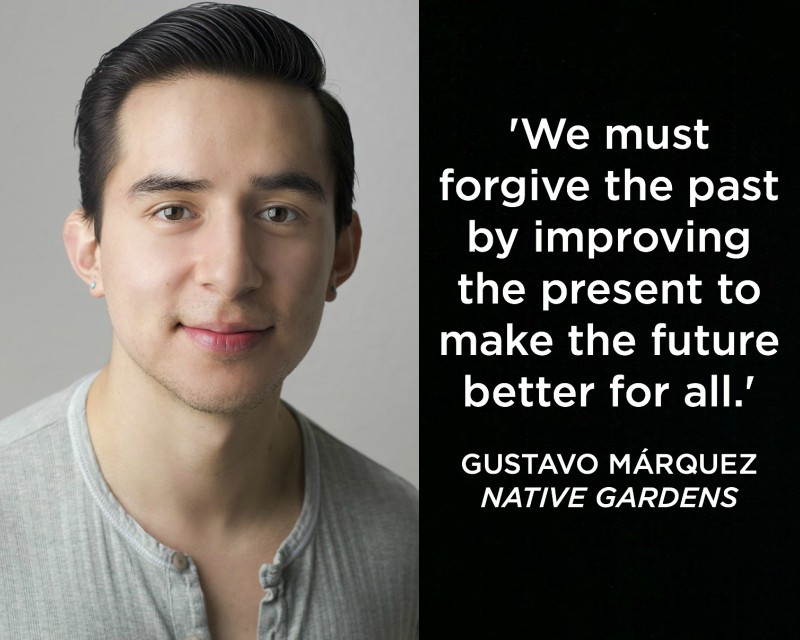 Gustavo Marquez, who plays Oscar, is from Denver and has appeared in various productions including Native Gardens,, A Christmas Carol, Grease and several other’s. He started out as a janitor and ticket agent for the Denver Center for the Performing Arts then went to Metro State University where he obtained a BFA. He played Cassius, Adriano and other roles (both in English and Spanish) in the Colorado Shakespeare Festival’s educational productions of The Comedy of Errors and Julius Caesar. He appeared in Local Lab’s controversial reading of The Merchant of Venice, and in the Colorado-born production of I Am Alive that played at the Alex Theatre in Glendale, Calif. Other stage credits include The Tempest, Metamorphoses, You Can’t Take It With You, A Funny Thing Happened on the Way to the Forum and Mozart’s The Magic Flute.

Gustavo talked to Latin Life Denver Media about his career and his portrayal of Oscar in Sweat.

Tell us your story…What inspired you to want to become an actor? How old were you?

From a young age I always had the inclination of being a performer of some kind. I remember when I was like 6 or 7 years old I wanted to be an opera singer, and when I was in the 4th grade I attempted to direct a small performance of The Hunchback of Notre Dame based off of the Disney movie. Then when I was in middle school I picked up and learned to play the violin and I played all through high school. It was in high school when I found my interest for theatre. My orchestra teacher forced me to play in the pit for the school musical my freshman year and I remember sitting down in the pit looking up at the actors on stage performing thinking that what they were doing looked like so much fun. That’s where it really started.

What was the role that jump started your career?

Native Gardens at the Denver Center last season really got the ball rolling for me and since then I have been riding that momentum.

Tell us about your theatrical training at MSU, How did it prepare you?

I had professors in the program that were very committed to my success and the success of their students. I benefited from individualized focus from the teachers on text analysis, and scene study. As part of the curriculum I was also a part of an intense directing class where I learned to analyze scripts and plays with the focus of a director.

What have been some of your favorite or most meaningful roles?

One of my favorite roles that I have played so far was Caliban from William Shakespeare’s The Tempest. One of the most meaningful roles I have played was Kourken in a new musical called I Am Alive by Denise Gentilini. The musical is based on the real life story of Ms. Gentilini’s grandparents and how they found each other and fell in love during and after the Armenian Genocide that started in 1915 and has yet to be officially named a genocide by the United States.

Your character Oscar in Sweat appears in most every scene of the production yet he is invisible to the main characters. They talk around him and through him as if he did not exist. “No hello for Oscar” Why do you think this is the case? How is he viewed by the other characters?

I think Lynn Nottage wrote Oscar the way that she did to depict the changing demographic of Americans of Latinx descent. In my experience I have always felt like our voice has always been left out of the conversation on a national level in politics and in society, but I believe that is starting to change. More and more we see Latinx youth finding their voice and power, to influence positive change in this country. Latinx people are the largest minority in the United States, so we’re clearly not going anywhere and our demographic is only getting bigger. Every election we are coming out to vote more, and more Latinx people are pursuing higher education. If your readers go and see SWEAT, they will see the character arch that Oscar goes through from being in the background to a different position in life.

When preparing for this role, did you research the history of people who were laid off because of the great recession of the early 2000’s and how it affected them?

The cast had a brilliant Dramaturg that supplied us with so much information about the town of Reading, Pennsylvania and the real life stories of people that were laid off due to mills and plants leaving the industrial town. In my own personal research I started by reading the script looking for the given circumstances, the information and background on the character. Early on we find out that Oscar is Colombian-American. So I thought, what may have caused Oscar’s parents to leave Colombia? And I immediately thought of the Colombian Conflict that started in the 1960’s and I began doing research on the conflict. I researched how that affected Colombia and how that created a refugee crises where many Colombian immigrated to the United States. Through my research and my found character circumstances I decided Oscar was an outcome of that Conflict.

What is it you would like for the audience to take away from your performance as Oscar and the play in general?

I want audiences to take away that we have more in common with each other than we think. We’re all just trying to survive with the tools that we are given in life. Sometimes those tools aren’t the best and cause conflict, but if we listen to each other we can find each other’s humanity and work with each other toward a just, equitable and inclusive community.

Sweat plays the Space Theatre at the Denver Center for the Performing Arts through May 26th.

Dance like you’re in West Side Story, For Just $10 for 5 People, Great Fun!