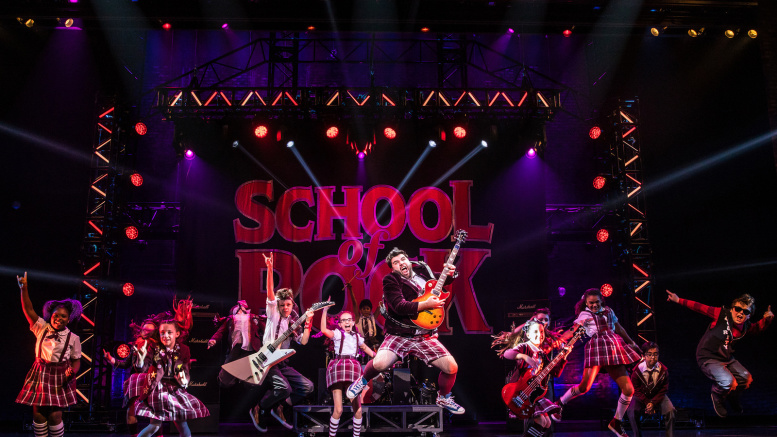 Do you remember what you were doing back when you were 10 years old? Remember picking up that hair brush or broom handle or anything that looked like a microphone and imagined becoming a rock star travelling the country showing off your talent? 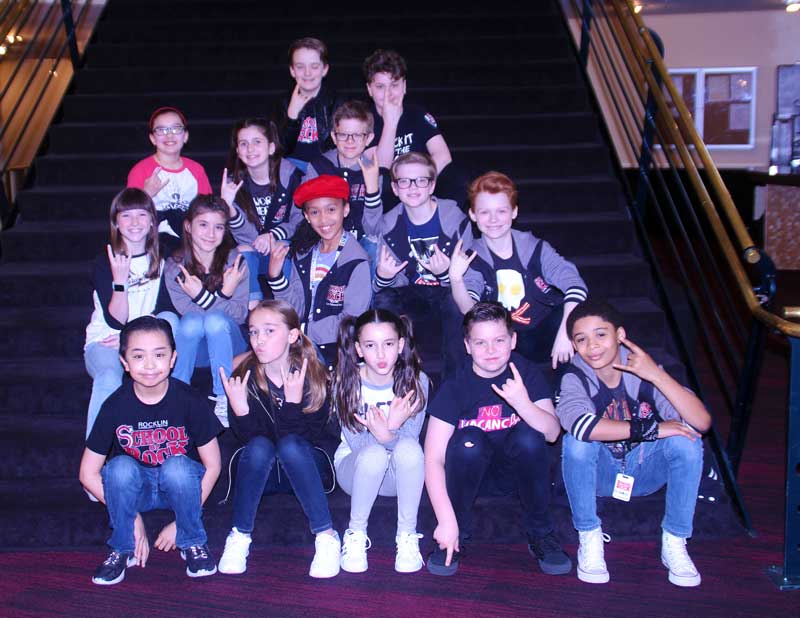 The kids of cast for School of Rock.
Photo by Joe Contreras, Latin Life Denver Media

For 15 young  kids it is a dream come true. They are “livin the dream” traveling the country as part of the Broadway tour of School of Rock. They beat out more than 22,000 other kids who responded to the original Broadway casting call. School of Rock is currently playing the Buell Theater at the Denver Center for the Performing Arts through June 10th

The four lead band members of the band sat down with Latin Life Denver Media after the opening night performance to talk about the show and what the experience has been like for them.

The play is based on the hit film by the same name.  This hilarious new musical follows Dewey Finn, a wannabe rock star posing as a substitute teacher who turns a class of straight-A students into a guitar-shredding, bass-slapping, mind-blowing rock band.  The show  features 14 new songs from Andrew Lloyd Webber, whose other Broadway credentials include The Phantom of the Opera, Cats, Evita. According to  show program, Applause Magazine, Webber is considered the father of the rock musical getting his start with Joseph and the Amazing Technicolor Dreamcoat and Jesus Christ Superstar.

All the original songs from the movie and the 14 new songs feature musical theater’s first-ever kids rock band playing their instruments live on stage. 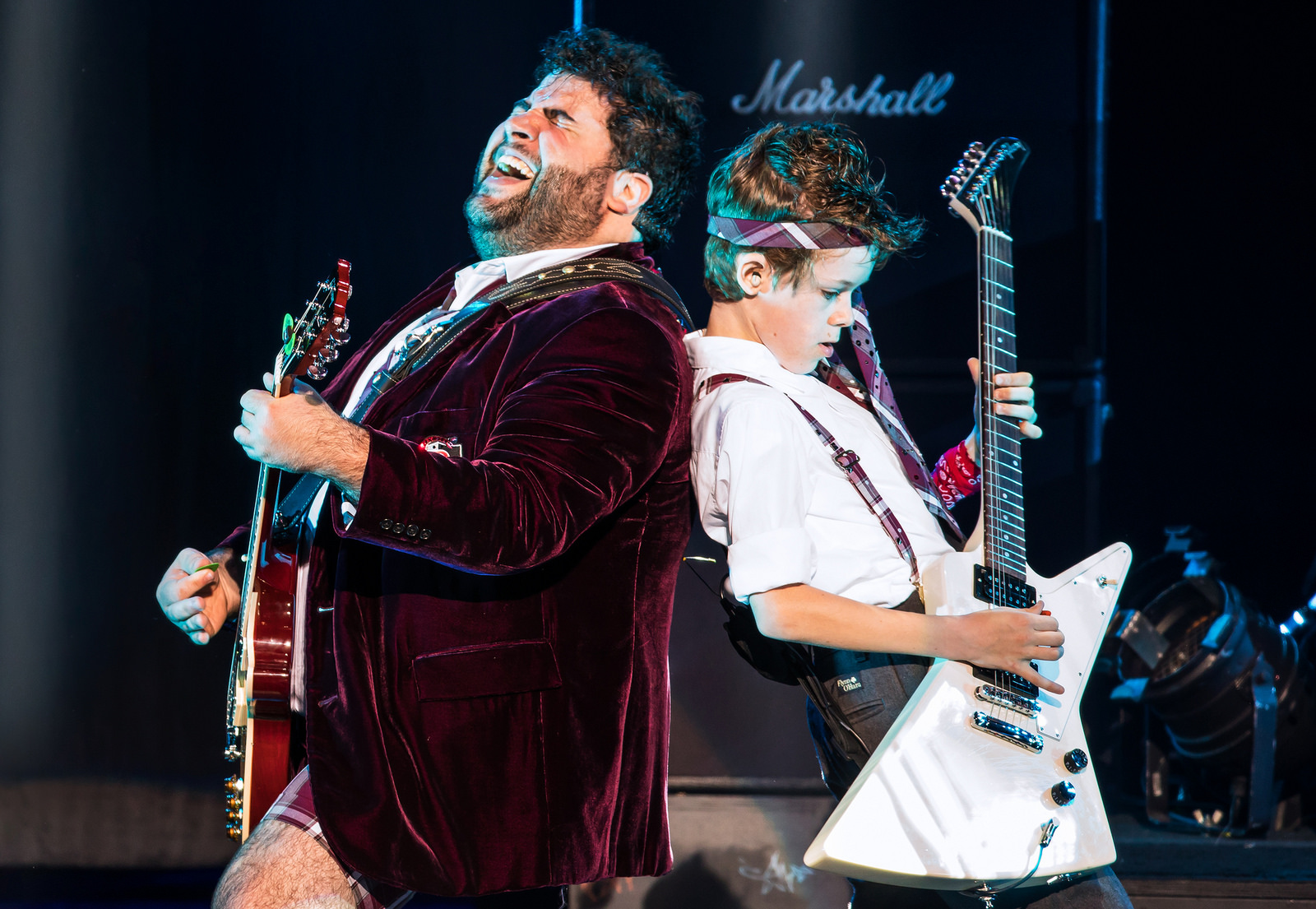 “Yes, we really do play our instruments live on stage for every song we perform said 12 year old Vincent  Molden  who plays Zack, the lead guitarist for the band. Vincent started playing when he was just six year old and now six years later is bringing down the house in city after city with his quick riffs that would make any guitarist envious. “It’s been like really fun and awesome to play with all these kids who can play instruments, sing, dance and act. It’s a really cool environment and playing on stage is super fun,”  he told Latin Life.

Not to be out done, 11 year old Gilberto Morettio-Hamilton, who plays Freddy the  band’s drummer said he started to play when he was two. “My parent are musicians so my dad started teaching me to play percussion, first with my hands then with some drum sticks and finally the drums. My parents were so super excited when they learned I had made the cast. “You’re going on tour! my mom screamed when she found out. It was July 4th and fireworks were going off when we got the news. It was so cool”  he said adding, “I want people to be inspired by me.” 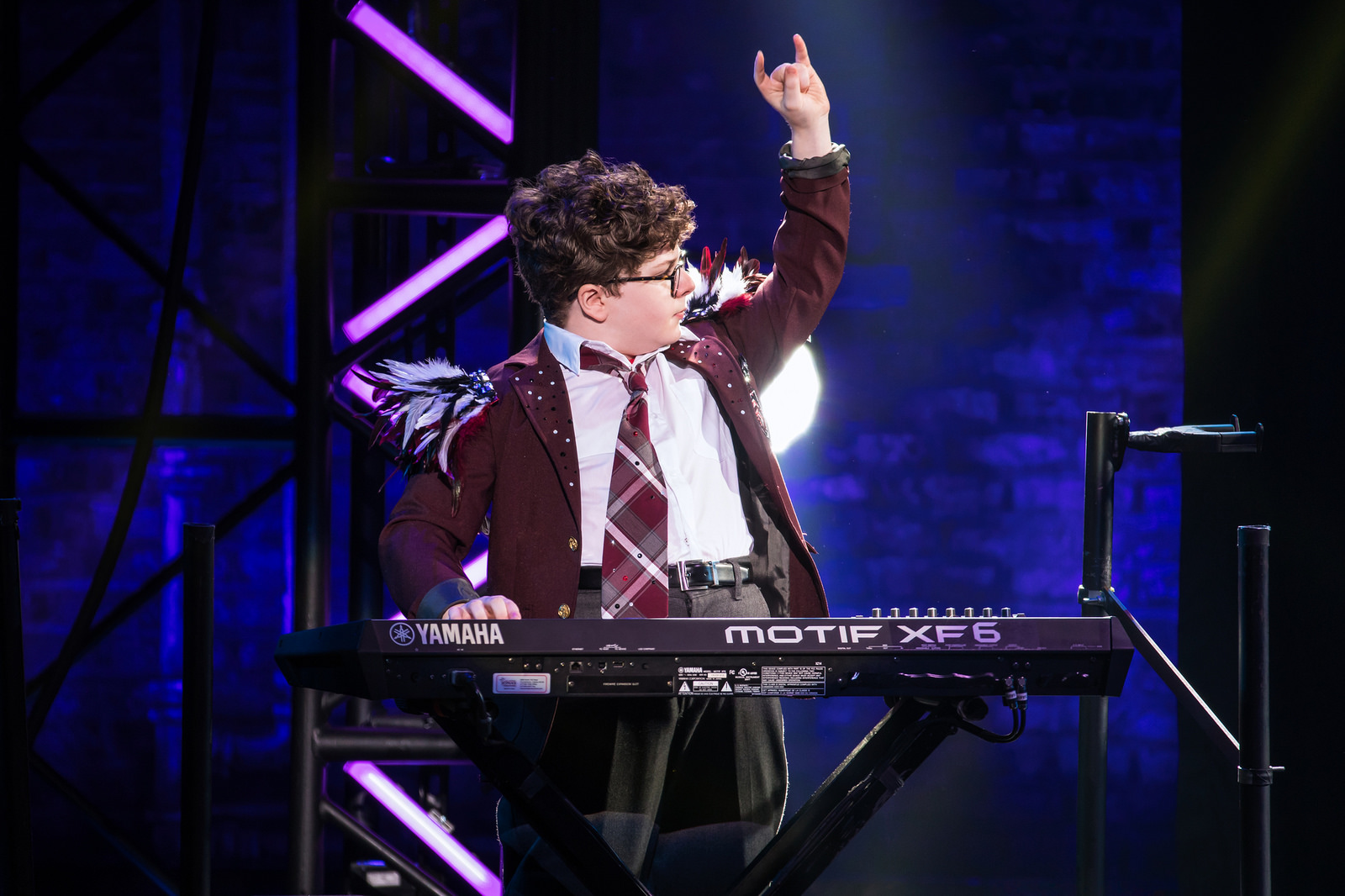 On the keyboards, the amazing 11 year old Theo Mitchell Penner, who plays Lawrence, the nerdy kid who dreams of being cool someday. “I don’t know where my talent comes from,” he said. “Nobody in my family plays an instrument. A family friend helped me develop my foundation on the piano. Once I saw the show I knew right away that I  wanted to play Lawrence.”  I am going to stick with the keyboards as I have so much invested in that instrument right now. It would be too much to give up,” he said 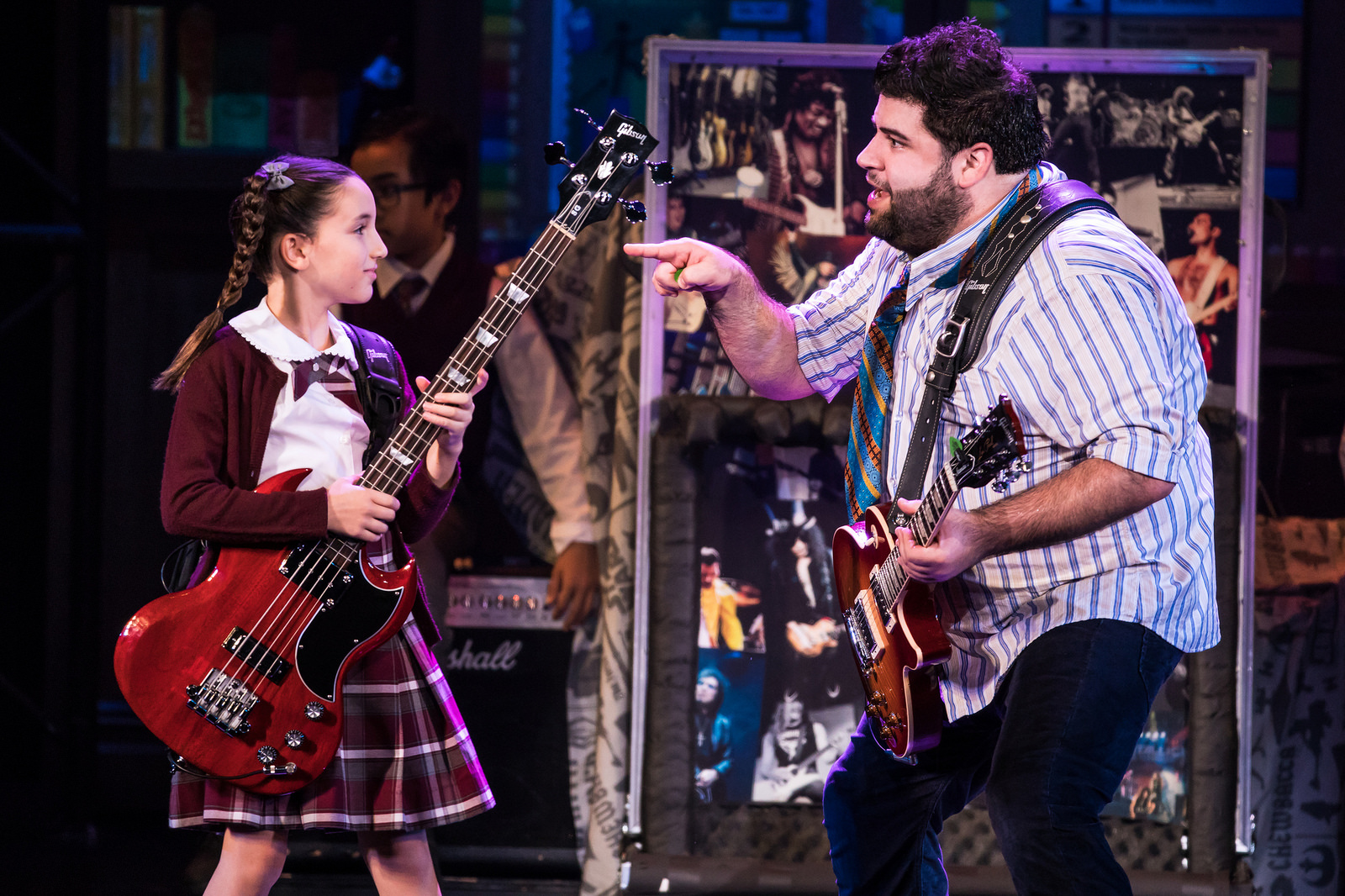 Denver Center_Theodora Silverman and Rob Colletti in the School of Rock.

The cutest of the group is 11 year old is bassist Theodora Silverman who plays Katie.  Her confident looks and skills on the bass guitar are show stoppers. Silverman had been to Denver before with the Broadway production of ‘Once’. “It was then that I was drawn to the bass guitar.  While backstage one day I saw a different kind of guitar and wondered, what kind of instrument is this?  The cast showed me how to play it a little bit and I immediately fell in love with it, the bass is such a cool instrument ,” she said.  Theodora also plays the piano, ukulele, flute and clarinet. “It was such a big dream of mine to be in this show. It took many auditions and when I finally got the part my mom, friends and even my babysitter, we all just started crying with joy.

Talking about what it’s been like having to leave home to be part of this tour which is now in it’s ninth month, Vincent said “leaving my family and friends behind while I do this has been pretty tough but it’s not the end of the world.” Theo chimed in saying, “Yea, it’s not the end of the world. On days off sometimes we get to go home and hang out with our friends.” As for school, Theodora said, “we have three tutors that travel with us and we usually go in the conference rooms in the hotels we stay at and learn for about three to five hours each day of the production before we have dinner and then get ready for the show.  One or both of our parents usually travel with us so that helps,” she said.

The biggest challenge for the group has been the grind of performing so many shows. “Especially on days when we have two performances. I don’t know how we do it but we do it,” said Theo as the others laughed in agreement.

If there is one thing these kids want people to take away from the production it’s the lessons School of Rock has to share with kids and adults as well. “Like the song we play, ‘If Only You Would Listen” said Gilberto, stating “it tells parents you need to listen to your kids and hear about what they want out of life. Just cause you are a lawyer doesn’t mean you child has to be a lawyer. Allow them to live their life and pursue their dreams.”

“It’s a great show because it inspires kids to try something new. Pick up an instrument or whatever and if you stick with it you will probably be pretty good at it,” added Theodora.

All four cast members said they love playing music and if they had to make a choice they would choose music over acting. They all have dreams of making it even bigger someday. For now they are just enjoying the ride, livin the dream.

School of Rock play the Buell Theater at the Denver Center for the Performing Arts through June 10th.