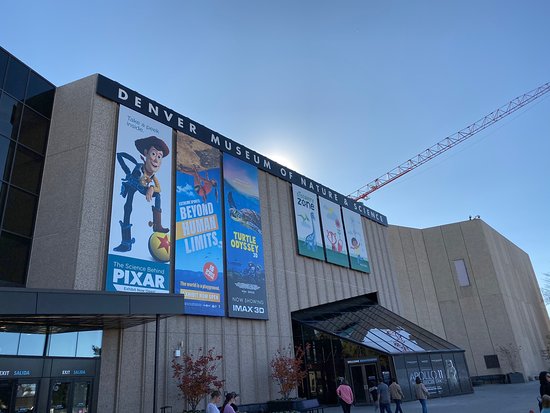 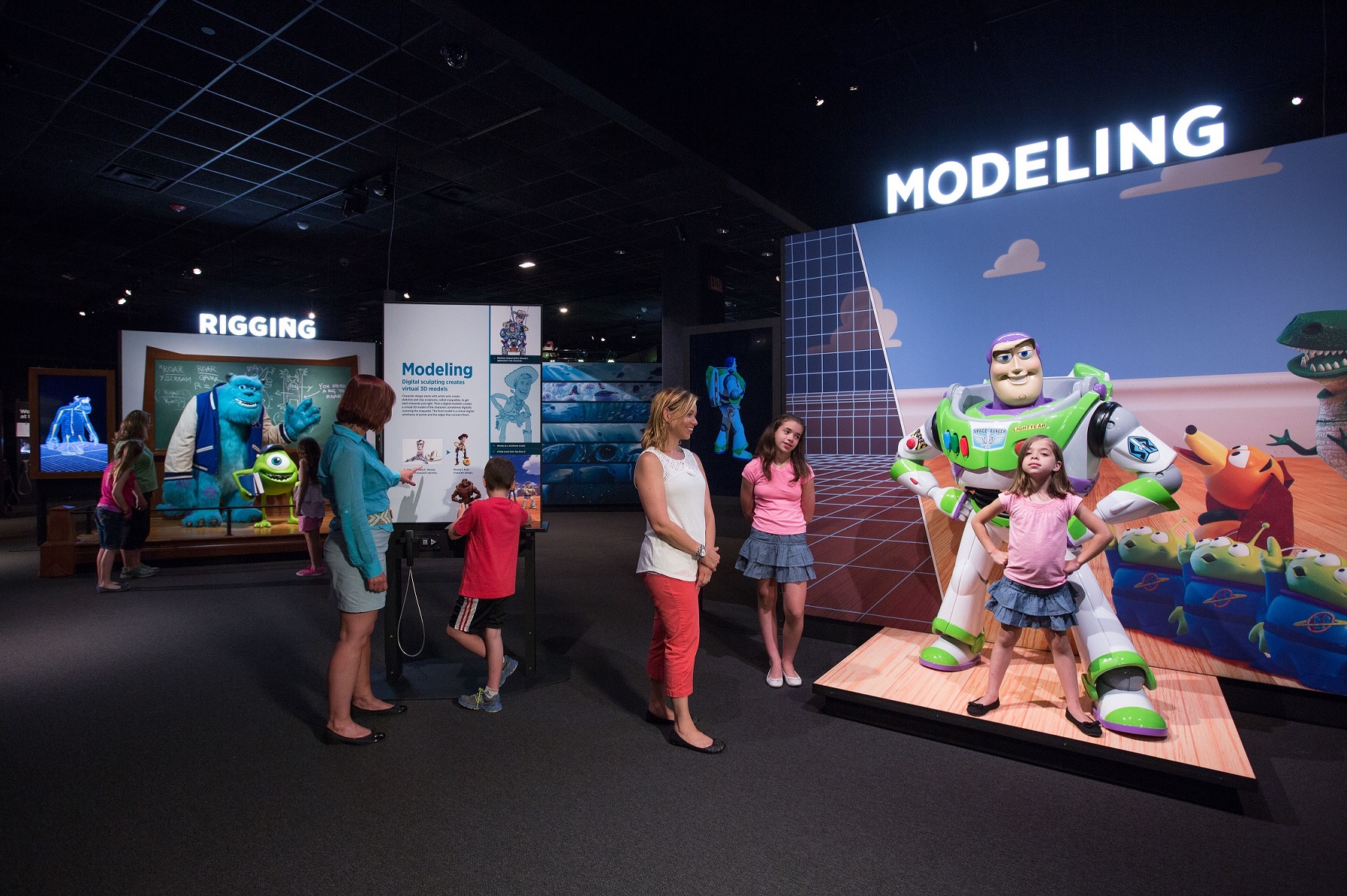 The Science Behind Pixar

Everybody has a favorite Pixar film, but what it takes to make one is a mystery to most fans. The lively new exhibition “The Science Behind Pixar” presents an immersive opportunity to explore the science, technology, engineering, art and math concepts used at Pixar Animation Studios every day to bring their beloved films and characters to life. Each section in the exhibition focuses on a step in the filmmaking process, giving guests of all ages an unparalleled view of the production pipeline and concepts used by the artists and computer scientists at Pixar every day. You will enjoy more than 50 interactive elements, hear first-hand from the studio’s production teams in special video stories, and even come face-to-face with re-creations of your favorite Pixar characters, including Buzz Lightyear, Dory, Mike and Sulley, Edna Mode, and WALL•E!

Do you really know what it takes? The exhibition “Extreme Sports: Beyond Human Limits” goes into the minds and bodies of extreme athletes to explore the psychology of their motivations and the science behind some of the riskier sports, such as wingsuit flying, ice and rock climbing, parkour, free diving, and much more. You will be inspired to learn about your own personal limits through fun challenges with your friends and family. Try a course developed by Ninja Nation, discover what it’s like to pilot a wingsuit, traverse kid-sized climbing walls for everyone, step into the Immersion Room and see what it feels like to ride a mountain bike and a whitewater kayak, get to know the stories of extreme athletes from Colorado and much more!

After the Impact: Earth’s Comeback Story

A newly discovered trove of remarkably preserved fossils, found at Corral Bluffs near Colorado Springs by paleontologists from the Denver Museum of Nature & Science, has painted a vivid picture of how Earth recovered after the devastating asteroid impact 66 million years ago that wiped out the dinosaurs. This discovery is a watershed scientific moment, and the Museum has created a brand-new bilingual pop-up exhibit to bring the discovery to life. See some of the very best fossils from the site. Handle real concretion rocks, that contain fossils, and replicas of fossils important to the discovery. Experience the discovery on a multimedia storytelling wall that tells about this remarkable find, and participate in hands-on experiments at the “Science Behind the Scenes” table.

Come on in, jump on board, and have some fun in “VR Arcade”! This “pop-up” experience uses virtual reality (VR) technology that lets you explore wherever your curiosity leads. Featuring six bays for individuals and a four-person Virtual Reality Transporter ride. Some age and height restrictions apply. Birdly, a virtual full-body flight experience, is also available in the VR Arcade.

Buzz! Inside the Minds of Thrill-Seekers

Most of us crave new experiences and sensations. Whether it’s our attraction to the hottest new burger place or the latest gadget, newness tugs at us. But what about those who can’t seem to get enough? They jump out of planes, climb skyscrapers and eat anything. They don’t have a death wish but seemingly a need for an adrenaline rush, no matter what. Join Dr. Ken Carter, author of the new book “Buzz! Inside the Minds of Thrill-Seekers, Daredevils, and Adrenaline Junkies,” as he explores the lifestyle, psychology and neuroscience behind personalities that seek high sensations. Carter is the Charles Howard Candler Professor of Psychology at Oxford College of Emory University.

The History and Future of Wolf Recovery

Government-supported wolf eradication programs began in the United States as early as 1630 because the animals’ existence conflicted with the agricultural interests of an expanding nation. These efforts continued for years, until both gray and red wolves were nearly exterminated. Mike Phillips, director of the Turner Endangered Species Fund, led both the Red Wolf Recovery Program and the project to return gray wolves to the Greater Yellowstone ecosystem. Phillips will examine the past, present and future of wolf recovery, particularly in western Colorado, which has become the keystone for these efforts.

Get animated for an adults-only night to celebrate the science and technology behind some of your favorite Pixar films. Dress up as your favorite Pixar character and play with 50 interactive elements in the temporary exhibition “The Science Behind Pixar.” A live band will cover classic tunes from Disney and Pixar. Ticket includes one drink and appetizers. Costumes encouraged.

Dive into the remarkable world of sea turtles during this special screening of “Turtle Odyssey 3D.” Follow Bunji the green sea turtle from a hatchling into adulthood as she swims thousands of miles, meets incredible creatures and has some wild encounters. After the film, Chris Prague, senior conservation ecologist for The Nature Conservancy (TNC), will discuss turtle ecology and TNC’s wildlife conservation efforts in Colorado. Coffee and dessert follow. Presented in partnership with TNC of Colorado.

Enjoy your Museum favorites, special family-friendly activities and free admission to the temporary exhibition “Extreme Sports: Beyond Human Limits” and discounted admission to “The Science Behind Pixar.”

Enjoy a mind-expanding experience with cocktails and entertainment the third Thursday of the month. For ages 21 and up. This month, are we alone? The search is on for the Goldilocks planets, where conditions are not too cold and not too hot but just right to sustain life. Create an alien and explore the night sky through telescopes.

This Thanksgiving break, take a night away from the family and head to the Museum for a free movie selected by teens.

Enjoy your Museum favorites, special family-friendly activities and free admission to the temporary exhibition “Extreme Sports: Beyond Human Limits” and discounted admission to “The Science Behind Pixar.”

amps available by the day! Looking for something amazing for your kids to do during school breaks? At the Museum, your child will experience fun and wonder, see IMAX films and planetarium shows, and explore the marvels of our temporary exhibitions. Available for grades K & 1, 2 & 3, and 4 & 5. Limited early morning drop-off and late pickup options available.

For tickets and schedules, visit dmns.org/imax.

Best friend, indeed. You will be awed by the life-saving superpowers and extraordinary bravery of some of the world’s most amazing dogs. Meet the superhero canines: Halo, a rookie puppy training to join one of the most elite disaster response teams in America: Henry, an avalanche rescue expert in the Canadian Rockies; Reef, a Newfoundland lifeguard with the Italian coast guard; Ricochet, a California surf legend helping people with special needs; and Tipper and Tony, the bloodhound brothers, leading the fight to save endangered species in Africa.

For 100 million years, sea turtles have traversed our planet’s waters, surviving mass extinctions and playing a critical role in maintaining healthy marine food webs. In the new IMAX film “Turtle Odyssey 3D,” you will swim alongside an Australian green sea turtle named Bunji as she takes an incredible journey across thousands of miles of open ocean. From hatchling to adulthood, Bunji has some really wild encounters with playful sea lions, tiny sea horses, and vibrant clown fish.

Some of your Hollywood favorites are coming to Phipps IMAX Theater! Previously released cinematic features are included in the IMAX lineup on Thursday, Friday and Saturday evenings. Check dmns.org/imax for tickets and the full schedule.

The Denver Museum of Nature & Science is the Rocky Mountain Region’s leading resource for informal science education. Our mission is to be a catalyst and ignite the community’s passion for nature and science. The Museum offers a wide variety of engaging exhibitions, programs, activities, and scientific research to inspire public appreciation and understanding of the wonders of Colorado, Earth, and the universe. The Museum is located at 2001 Colorado Blvd., Denver, CO, 80205. Information: dmns.org or 303.370.6000. Many of the Museum’s educational programs and exhibits are made possible in part by the citizens of the seven-county metro area through the Scientific & Cultural Facilities District. The Museum is accredited by the American Alliance of Museums. Connect with the Museum on Facebook, Twitter and Instagram.

A Denver Visit To The Heart of Cuba, More Than Cafecito, Cigars and Classic Cars

Creatures of Light Will Amaze You, Are You One?

Must Sea, Dead Sea Scrolls, A Once In A Lifetime Opportunity